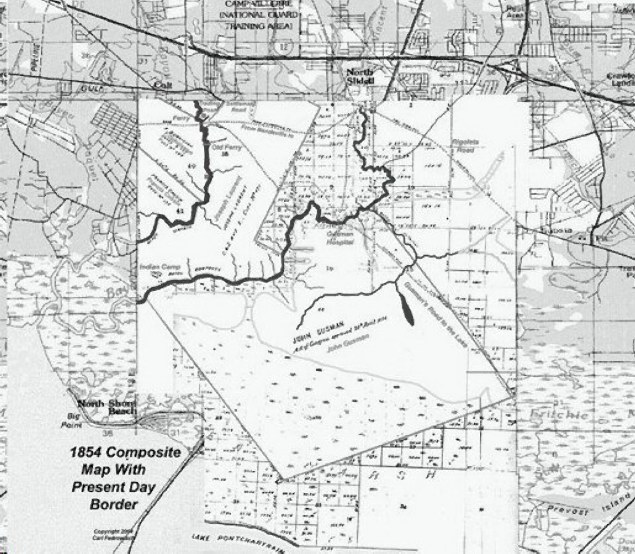 
From "The Early History of Bonfouca and Lake Pontchartrain"
by Carl Fedrowisch
And "Slidell the Camellia City"
by Dan Ellis DanEllis.Net


Tell them you borrowed this information from Dan Ellis
Prior to 1850
New Orleans is founded in 1718. At the time the area was a vast cypress swamp and there was an endless supply of lumber. However there was a need for other building supplies.
Indians cross the lake in 5 man pirogues to sell their cajue, house-ware and baskets made from cane.
The first industry in St Tammany Parish was Claude Vignon, aka, LaCombe's tarpit, on Bayou Lacombe in 1722. Besides tar, which was essential to boat building, roofing and waterproofing, LaCombe eventually supplies lumber, bricks, charcoal and sand. Soon several more tarpits were built on Bayou Liberty, Bayou Bonfouca and the Tchefuncta River.
In 1737 Francois Rillieux settles on Bayou Bonfouca, near the present day Slidell railroad station. The bayou there is renamed Bayou Vincent after his son, Vincent Rillieux, the famous soldier-sailor of the Revolutionary War.
In 1781 after starting a brickyard on Bayou St John, Francois Cousin moves across the lake and claims 4800 arpents of land, from Bayou Paquet to Bayou Castine. He moves the brickyard across the lake because of the superior clay on this side. Over the years his buisness expands, as do his fleet of schooners.
During this period shipyards grew up on the bayous, supplying the schooners that sailed the lakes until the early 20th century.


1850 Most of the major parish roads are in place. Future Highways 21 and 25 were established. The Federal goverenment updates Old Military Rd, and homeowners within 5 miles of a road are expected to keep it up.
Most of the regular roads are either dusty or muddy, and wind around following cow trails and the bayous. Nevertheless one can travel from Mandeville to Bonfouca in 3 hours by horse carriage.


1854 Aug 8, the New Orleans, Jackson, Great Northern Railroad opens for buisness and trade from Madisonville to Covington dries up.  John Gusman is granted the lands that become Slidell.


1857 The Panic of 1857 results from the loss of business on the north shore.  St Tammany population's white population drops 10%.


1863 January 1, all slaves freed per the Emancipation Proclamation.


1868 George Ingram organizes Mandeville and Sulphur Springs Railroad Co.
The Republican Party, aided by the US Army, control elections in New Orleans.
This period is known as the most corrupt in La. history.


1869 A railroad was build for the L&N line between New Orleans and  Mobile, but the bay trestle bridge fails within nine months, plunging a train into Bay St. Louis.
The shipworms, "Teredos Navalis", 3.5-inch wormlike bivalve mollusks, who digest cellulose and stranded Columbus once, are the problem.


1870 Ingram dies and the charter is bought by Capt William H Hardy.
The name is changed to New Orleans and Northwestern Railroad Co.


1874 When it is discovered that creosote lumber is immune to shipworms,  J.W.Putnam brings back from England, the creosote process invented by Dr Bethel and builds the first creosote plant in Louisiana at Gautier.


1877 Federal troops leave Louisiana and free elections resume, after a deal is made that makes Rutherford B. Hayes president.


1880 The St Tammany Farmer reports engineers think it possible to span the lake with a 22 mi. bridge.


1881 The St Tammany Farmer reports preliminary survey complete for N.O. to Mandeville trestle, but later the site is moved to the east end of the lake.
A ferry operates out of Robert's Landing on Bayou Bonfouca, behind the current RR station.
A work camp forms around Robert's Landing, which becomes the center of activity for three years.
In August a telegraph is installed connecting Slidell Station, New Orleans and Meridian.
The creosote plant is built near Robert's Landing bringing in many new people to the area.
December 3, work on the NO&NW RR commences on the northshore.


1882 Work commences at Meridian Jan 7, for the NO&NW Railroad.
Plans are for the bridge across the lake to be finished by end of the year.


1883 Oct 15, the NO&NW RR bridge across Lake Pontchartrain is completed.
The first train arrives in N.O. from Meridian MS, with Chief Eng G. Bouscaren, General Superintendent R. Carroll, Div Eng S Whinnery and Gen Freight Agent H. Colbran.
The Slidell town site is surveyed and mapped. Baron Erlanger names it after his father-in-law, John Slidell, a Confederate ambassador. Slidell owns property in Mandeville, but never visits the town named after him.
Exiled, Slidell and his wife die in England, and his children in France.


1887 June, the East Louisiana Railroad is completed between Pearl River and Abita Springs.
With his brickyard doing so well, Fritz Salmen is joined by his brother, Jacob.


1888 May 16, East Louisiana Railroad reaches Covington.
Nov 13, Slidell is incorporated, with 2,320 acres within its limits.
The first mayor was Seth H. Decker and together with the Board of Aldemen, H. Mandin, Oscar L. Ditmar, A.C. Vrovost. Fritz Salmen and Charles McManon, select a committee to look into constructing a jail and
mayor's office.
Dec 19, the town counsel appoints Edgar P. Robert as town marshall.
After the Slidell post office was built, the one in Bonfouca is shut down.


1889 The Slidell jail and mayor's office is built for $275.
The Gause family build another lumberyard and the Fassman family starts a brickyard.


1890 Poitevent and Favre build the largest mill in the world, at Perlington MS.
Albert Salmen joins his brothers and they start a sawmill between the railroad tracks and Bayou Bonfouca.
June 12, the St Tammany Farmer mentions McCaren and Sons brickyard, 2 miles south of Pearl River.
A.C. Prevost builds a hotel, the Pioneer House.
Slidell's population is 364.


1891 St Joe Brick Works is started south of Pearl River and soon bought by the Schneider family who rename it, the Schnieder Brick and Tile Company.


1894 The Schneider Brick and Tile Company produce 175,000 bricks and tile per day, employing 200 workers and a special Haig Continuous Kiln, the largest in the U.S.
The Bird Cage Hotel and Saloon, on the corner of Fremeau and Front, owned by E.H. Litton, was such a sucess that a total of 13 saloons were built on Front St.
Other businesses sprang up around Cary and Cousin, drygoods and medical.


1895 Salmen builds a shipyard on the west side of Bayou Bonfouca and begins building ships to transport their products.
Mississippi votes itself "Dry" and Slidell sees a flurishing "jug trade" from Mississippi.
On the La. side of the Pearl River across from Perlington, William King ran a bar out of a moored flat-boat.
There is a need for hotels, particularly as Eunice Carroll's Hotel burns down.


1898 Dr. Joseph Feston Polk sets up practice in Slidell. He makes his rounds on horseback at first, then gets a horse and buggy.


1904 N.O.&G.N. RR, or the Great Northern, was formed by F.H. and G.C.W. Goodyear.
They plan to run a RR from N.O. to Bogalusa, then up the west side of the Pearl River to Jackson MS. They purchase the East Louisiana RR.
The Salmen Brothers of Slidell start building a RR from Slidell to Mandeville.


1905 The Salmen RR is completed and eventually links up to the N.O.G.N. line.


1907 The Slidell jail is moved and a permanent two-story brick building is built on the spot. Downstairs is the Marshall's office and five jail cells. Upstairs is the mayor's office and a meeting room. It costs $3,865.40.


1910 Salmen brickworks employs 800 men and 20 clerks at its company store.
The Salmens operate timber operations within 75 miles of Slidell, using their own full-guage railroad tracks, and 4 engines, with 250 rail-cars.
Salmen shipped 23 million bricks, used to construct the Roosevelt, DeSoto, St Charles and Grundwald Hotels, Masion Mkanche, D.H. Holmes, Loew's State Theater, the Metropolitan and Whitney Banks, the Masonic Lodge and many other buildings were built using Salmen brick, as well as N.O.'s storm and drainage system.
The Salmen lumberyard covered 40 acres. Its sawmill had a 60,000 foot daily capacity and the planing mill could produce 50,000 feet daily.
Salmen also operated a 100,000 shingle a day factory as well as producing 50 cords a day.
Slidell population is 2,188.


1917 Southern shipyard completes a 229 foot ocean going vessel. Also the Norwegian Line's Baltic I, II, III, and IV are also constructed.
June 2, the St Tammany Farmer reports a study for a highway betweenN.O. and Chicago. They considered connecting Robert Rd to the Rigolettes.
These routes become Highways U.S. 11 and U.S. 90.


1918 WWW I ends and Dr. Polk returns from serving as a medic and buys himself a Model-T Ford.


1921 The Pravata family start selling gasoline at the Triangle Garage, which soon was open 24 hours a day to service travelers from N.O. to the Gulf Coast.  It became the center of Slidell "action" as well as the Civil Defense.


1925 The Old Spanish Trail is completed, between St Augustine and San Diego.
Slidell becomes a major stopover for a major crosscountry highway, 90.
Clyde Polk opens the Cresent Drug Store at the corner of Cary and Cousin.


1926 Oneisime Faciane opens up the White Kitchen Cellar, the forerunner of a chain of three White Kitchens, each with the neon sign of an Indian cooking over a fire.


1929 The Rigolet Bridge is completed and Slidell becomes a major crossroads.


1962 Slidell becomes the hub for the space program when NASA builds the Slidell Computer Complex to support Michoud and Stennis Space Center.
So many new residents move to the area that Slidell becomes known as "New Orleans Bedroom".


Tell them you borrowed this information from Dan Ellis